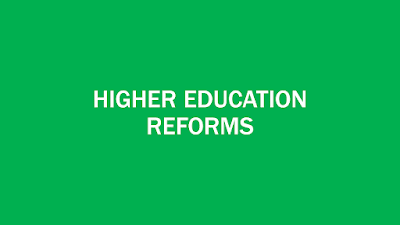 Professor Zaharom Nain, the Chair of the Malaysian Academics Movement (MOVE), also known as Gerak, has identified five areas for urgent reform of higher education in Malaysia. Professor Zaharom said that he had shared the proposals with the former Minister of Education, Dr Maszlee Malik, who agreed to support them if Pakatan Harapan is voted to power.

The five areas covered are, (1) the highly divided system of higher education which lacks unity and prevents the formulation of coordinated policies; (2) the Government’s interference in the administration of higher education institutions; (3) restoring universities their essential attributes such as institutional autonomy and academic freedom; (4) the rights and role of students in higher education and (5) inclusiveness in all matters, from the selection of students, the appointment and promotion of faculty and the selection of Vice Chancellors and appointments to the board of directors.

Following are the details of the proposals.

1.      The system is highly divided with different sets of policies and laws regulating the different divisions of the system.

There are at least six acts of parliament dealing with the establishment and management of higher education institutions. There are no less than eight different types of degree-awarding institutions and 6 types of universities. The divisions, including the public/private division, are the result of ad hoc policies devised by politicians out of political rather than educational considerations. There is currently no single authority to unite the system and coordinate its role in the development of higher education.

Harmonization of the system will require the establishment of a higher education commission or similar entity to regulate the different types of institutions, subject to the same standards, and bring them within a single funding regime. The National Council on Higher Education, established by an act of parliament in 1996, coordinated the policies on higher education, which the Minister was required to implement. The Council ceased to function in 2013, without any reasons being given. Widening the scope and constitution of the council and giving it powers of enforcement may be an alternative to the establishment of a commission. Whatever the solution, there have to be safeguards against noncompliance by the government with the laws it passes.

2.      Government interference in the governance and management of higher education institutions.

There is excessive interference by the government in the educational processes of higher education institutions. In the case of private institutions, the interference is written into Act 555 which regulates private universities and colleges. Public universities and higher education institutions, like Government Linked Companies (GLCs), are used by the ruling dynasties to reward political loyalists. The government’s power to appoint university VCs and DVCs and directors on the board of universities has impacted university governance and the accountability of senior officials of the university and the board of directors. Instead of focusing their duties on the university community of academics and students and the public, these officials act to appease the government and seek its patronage.

The appointment of VCs, DVCs and directors must be made by an independent agency such as the proposed commission or a reconstituted National Council on Higher Education.

There are attributes associated with universities without which they lose their special character. The Universities and University Colleges Act 1971 is silent on matters such as university autonomy, academic freedom and students’ right to participate in the governance of universities, all of which are important attributes for the university, the academics and the students to play their respective roles in the university.

These essential attributes must be legislated. The Universities and University Colleges Act 1971 or any new legislation that is passed must entrench these fundamental rights.

Despite the rhetoric of student-centred education, current legislation on higher education provides little to safeguard the interests of students. Most of the provisions directed at students deal with discipline and what they are prohibited from doing. There is a provision under Act 555 which allows the MOHE to take action against the institution when students’ interests are under threat, but the provision lacks clarity to be of any practical use. There are no similar provisions in the other legislation.

Without any legislative safeguards, students have to rely on their contractual relationship with the institution. Although the Consumer Protection Act 1999 was amended 10 years ago to extend protection to students, recent cases where students were stranded with courses that were not accredited show that neither the MOHE, the MQA nor the Consumer Tribunal was able to adequately resolve the students’ problems.

A root problem that affects not just the higher education system but many other aspects of civil rights are entrenched discriminatory practices to appointments to public office. Discrimination is rampant in our public universities and higher education institutions.

The solution is simple but its implementation requires a commitment from the government to change these discriminatory practices, not only in the admission of students but in the appointments of VCs and directors. Ignoring this weakness in the system will leave our universities simply as entities bearing that description. Like places of worship that have given up on their basic tenets.

U. K Menon
I am a lawyer who left practice to teach law, then combined law with education and developed an expertise in law and education. I follow developments in law and policy. The Malaysian Private Higher Education Act 1996, The Universities and University Colleges Act 1971, the Malaysian Qualifications Agency Act 2007, The Education Act 1996 are some of the laws I keep contact with. I find politics to be unduly interfering in education, using law as an instrument for that interference. Feel that a better knowledge of those laws will help minimize that interference.